The house developer Hexage with its brilliant game has always succeeded Android users, but not for some time now launched the new titles on the Play Store. The company recently posted a new adventure on the store’s green robot: Reaper . 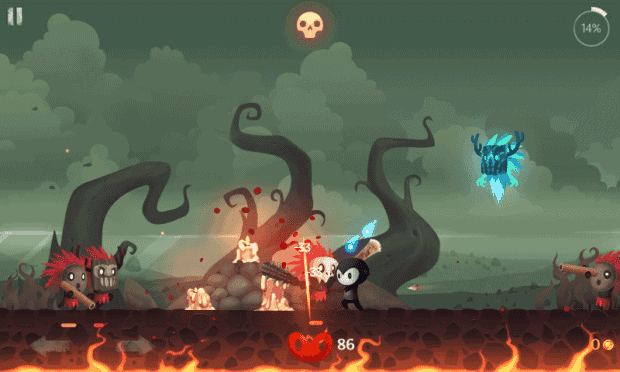 The main character is a Black Warrior that will immerse themselves in endless battles to fight any kind of monster that lives in the area of Wilderness.

The dark fighter has a spectacular swords  that will allow him to face the enemy with skill, but only if you can actually use the playing technique proposed in Reaper.

The controls are limited to the tap on the screen and your finger must touch the specific areas to manage the protagonist. On the left side we have the chance to go forward / backward, while on the right you will be able to jump, double jump and use weapons.

The normal attacks of the warrior will be automatic , ie when an enemy approaches his sword put into action. This method allows you to earn the special powers, represented by dazzling death’s heads , allowing you to use the special attacks . The latter are activated when the shots of the character will not be automatic, but decided by the player.

The Conquest of special shots will determine your victory, but now we move from having to kill the monsters. Reaper is studded with different opponents with different skills. Round some pools of water  amazingly durable warriors with blowpipes, magical powers, weapons and soldiers with many other antagonists.

The attack was not limited by land, but also from above: you often find yourself surrounded by hideous flying insects , also huge. To fight the enemies of the sky you can use the elements of the stage as springboards to jump in and start a  fight in the air . With the progress of the levels, even these “jumps” will become of the dangers to be avoided, in fact some will be particularly sharp  and should not be touched.

Do not miss the opportunity to buy, or even sell the weapons to make the dark warrior even more powerful. By purchasing experience, and exceeding the levels, you will also unlock the special cards that will provide new skills to the protagonist or empower those who already have.

As we have said, the game is not just an action game, but also an RPG. The levels are placed on a map, and every time you try to immerse yourself in a new mission you need to communicate with enemies and allies . Reaper does not support the Italian language, but it is only English.

As we  have said in the beginning, the signing of Hexage is noticeable immediately. The bright flames access every setting of the game, especially during the fighting, especially when rain down gold coins.

The title allows you to collect money and also special beans.These tokens will be incredibly brilliant as well as special shots generated by the attacks “manual” of the warrior.

The 2D graphics  Reaper will not disappoint you, every setting is treated in detail, including the soft colors and interesting features also special background elements that will reveal the place where you are.

Present a normal sound track adventure that leaves room for the special effects of the game are generated mainly by the noise of arms.

Reaper is an app interesting that with the progress the levels become increasingly difficult. The house developer allows us to put in the Play Store download the free version that offers the ability to play up to the 10th level, after you buy the full version in-app. They are available in three editions of payment : 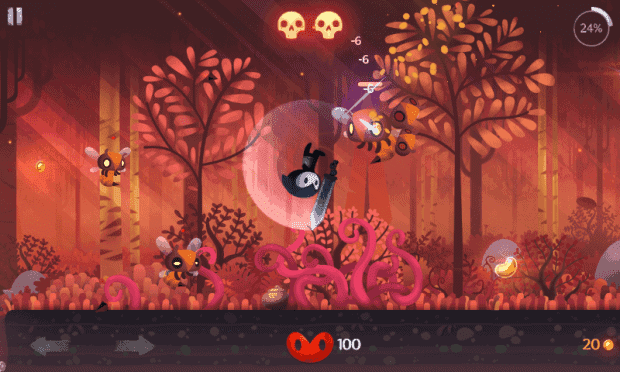 “An RPG that truly understands mobile gaming. This is one of the most enjoyable mobile games I’ve played.” – Android Police

“The variety and detail of the enemies is also wonderful. The game is incredibly polished from top to bottom.” – PC Mag

“Hexage really nailed the whole concept. This is one of the most additive and entertaining games I have played.” – The Android Arcade

“Reaper has intricately woven together the elements of a compelling story with hilarious dialogue and arguably some of the best game content that is sure to win anyone over.” – Android Headlines

“Reaper is exactly the kind of quality we’ve all come to expect from Hexage, and well worth adding to your mobile collection.” – Geek.com