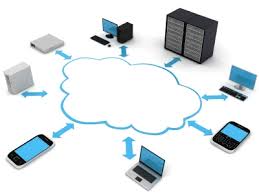 By entering the digital age of cloud data storage, we have significantly reduced paper consumption and lowered our carbon footprint.  However, the digital cloud is not without its ecological impact- it is comprised of hundreds of thousands of computer servers that take up physical space and require electricity.  The electricity used by these data centers can come from various sources, but often times it is derived from coal burning, diesel fuel, and natural gas– with significant ecological impact.

The Dirty Data Secret
Yearly, data centers in the U.S. alone consume over 100 billion kilowatt-hours of electricity.  That represents 2% of all the electricity used in the United States.  In fact, a single data center can use as much electricity as a small town!

One of the world’s largest data centers is located in Chicago and takes up a whopping 1.1 million square feet of space—that’s equivalent to over 20 football fields.  This data center is powered by 53 generators that each hold over 30,000 gallons of diesel fuel.

Tech related services like Netflix streaming and Instagram browsing contribute to 2% of global carbon emissions, which is equal to that of world-wide aviation.  Yes, scrolling Facebook requires the same amount of energy as fueling a fleet of 747s!

Sustainability Switch
In light of the huge technological need for electricity, many tech companies are turning to renewable energy.  Intel Corporation is a leader in this new sustainability venture, using a miraculous 100% of its power from renewable energy resources like solar and wind energy.  Apple has made a similar pledge.
Facebook is another influential company that is paving the way for sustainability.  Once using over 50% of its power from coal burning, the social media giant has reduced coal burning in favor of renewable energy resources and continues to seek improvements that lower the environmental impact.
Google’s data storage consumes 0.01% of global energy- yet the search engine uses a great deal of renewable energy and has begun to sell its excess supply back into the grid.

A newer strategy for sustainability is building data centers in cool or cold climates to reduce energy consumption.  Computer servers generate a great deal of heat while operating, yet they require a cool environment to function properly.  So rather than constantly piping in air conditioning, these data centers in cool climates can channel fresh air from outside, thus reducing their energy consumption.  In some cases, the computer-generated heat is even recycled to heat other buildings.
However, leaders like Twitter and Amazon have yet to make a significant effort to reduce their carbon footprint.  They rely mostly on coal-burning to power their data centers.

How to Make a Difference

As consumers and cloud users, we have the power to influence large tech companies and opt for cleaner, more sustainable practices that help protect the environment.  Cast your vote with each dollar you spend, and recognize that not all clouds are made of air.